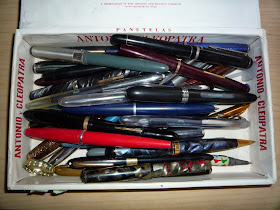 “Writer’s block” is the ultimate first world problem.  I deny its existence.  Laziness, procrastination, misplaced priorities: I am well-acquainted with these.  And, sometimes you’re (i.e. “I”) just not smart enough to solve in language the problem you have set out for yourself.    But “writer’s block?”  Pffff.

I was walking down the street in Berkeley the other day when I discovered a typewriter repair shop.  Sweet. I was able to acquire a typewriter ribbon for my Olivetti lettera 22.  Also, I saw the exact same Royal, with the specific gravity of a small tank, I used in undergraduate school.  I had typed out a line from Coleridge, my first literary love, and taped it to the machine: “Should Sloth around me throw her soul-enslaving leaden chain!”  The line come from Quae Nocent Docent, which translates to “What hurts, teaches.”  (Coleridge was very Nietschean, eh?).  Of course, if I was at the typewriter I was already not being slothful.    I should have taped it above the television.  But then, in the years I wrote on that typewriter I didn’t own a television.    I must have just been spending a lot of time staring off into space.

Nancy Please, the film by Andrew Semans (2012) appealed to me greatly, but maybe you had to have “been there.” It’s about a graduate student in English who has a serious case of “writer’s block.”    Thus, it’s really about weakness and neuroses.  But it’s pretty funny and spot on.  The guy “can’t” write his dissertation because the “key” to it is a copy of book that his ex-roommate is holding hostage.  Actually the film might function as a good wake-up call to anyone who thinks she or he is suffering from  “writer’s block."  Check it out, if that shoe fits.

Back in Illinois we had a priest, Father Pricco, who I think was not necessarily always a gifted speaker.  But once he said simply “Do your work.  Say your prayers.” Somehow, this was exactly what I needed to hear.  Sometimes it’s that simple. I’m grateful to him for that.  I think this actually embodies the crazy blend of Roman Catholicism and zen that Kerouac was onto (yes, Kerouac: still on my mind though my writing on him is done.  I am reading the Kerouac/Ginsberg letters now and once again Jack has me under his spell!  I cain't quit him, he gotta hold on me).

Pynchon.  Pynchon of all people.  Pynchon of the contemporary doorstop masterpieces Gravity’s Rainbow and Mason & Dixon.  Pynchon who seems to have all the output of Joyce Carol Oates and Stephen King and exponentially more linguistic energy.  Pynchon had, typed out above his computer (or typewriter—can’t remember which): “Eschew Sloth.”  I think he capitalized it, as in, one of the seven deadly sins, a subject he actually wrote about.  He eschewed it, all right; he must eschew it every day.

So, let’s go then, put your shoulder, queer or otherwise, against the wheel.  The page is blank and you are not “blocked.”