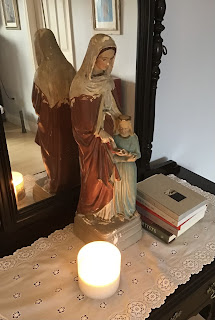 Arrived in Michigan the day of my mother’s 90th birthday and leaving the day after Mother’s Day. Lucky and blessed to spend these days with her.

My mother lives on a lake in northern Michigan. The place is wonderfully serene before Memorial Day. Earlier in the week I kayaked out to the wetlands in the rain in the morning. The air was cold but windless and the lake was glassy but for the raindrops. I did not see the heron I searched for until I returned home where it stood in Turtle Town not a hundred feet from where I had set off.  My feet were cold four hours later.

Today at the Mecosta Bookstore I found a pristine copy of Gary Snyder’s Turtle Island, unyellowed pages, possibly unread, and priced less than it would have cost in 1969 dollars.

Perusing the book, well known to me, I find the only sign of a previous reader, the last sentence of the Introductory Note underlined in ballpoint:  “. . . all share views at the deepest levels of their cultural traditions African, Asians, or European.  Hark again to those roots, to see our ancient solidarity, and then to work together on Turtle island.”

My son and I kayak out to the wetlands.  We coast silently past the loon’s nest, the mother flattening herself over her eggs to hide from our view.  We paddle lightly, sorry to have worried her. In the distance I see a line of shining spheres on a log. They look like football helmets lined up for game day. Turtles. We approach as slowly as possible.  The log is about forty feet long. Over twenty-five painted turtles shining in the sun, dropping off one-by-one as we approach.

I am in Michigan for only a couple more days, my wife in Anchorage.  I imagine her receiving the cut flowers our son sent.  She reminds me telepathically from great distance that our son needs to deliver the statue of the Blessed Virgin that we inherited from my aunt.

I last saw Gary the pre-pandemic summer in Davis where we talked, as ever, of the mountains of our youth, the Cascades.  And also of the spectacular black and white photographs of Vittorio Sella, which he remembers vividly from the Mazama club house in Portland and I know mostly from books.

When you read Turtle Island on Mother’s Day you become acutely aware of the Mother-ness of the work, in addition to the recurring themes of gratitude and stewardship: “all created things are of the mother.”

My son has remembered to turn over the statue to me.  It’s encased in bubble wrap and I pack it carefully.  He says he kept it in his attic with its face in the little attic window watching over the street in his blighted neighborhood.

When I hug my mother goodbye she says, not entirely kidding, “David, don’t go.” She steps back and adds, “I’ve been saying that for fifty years.”

My son drives me to the airport.  I leave Turtle Island with him. Also a copy of The Nick Adams Stories. He says he’s fished the Two-Hearted River but hasn’t read the story. This is somewhat different from others who know the “river” because a craft beer is named after it.

Home: the Virgin survived the 3500 air miles intact.  But when we unswaddle it from its bubble-wrap, we discover the statue is not of the Virgin at all.  It is Saint Ann, the Virgin’s mother, instructing a smaller, supposedly younger, blue-clad Virgin, pointing with her index finger at an open book.  Two-for-one.

Students of Zen”: “There is no other life.”

Posted by David Stevenson at 8:49 AM