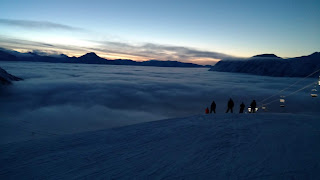 The temperature was eerily warm for late January, but I was determined to ski at the resort and so set out for Girdwood.  I had been spending all my ski time on the cross country trails in Anchorage.  Along the highway I could see little piles of rubble loosened from the crags above by the earthquake and its aftershocks.  Note to self: let someone else test the rock before rockclimbing in the spring.  A sign flashed avalanche work closures on the highway but I blew by it too quickly to read the dates and times.

The snow was wet at the base, as was expected. I managed to make the last run up Chair 6 and as the chair approached the end of the ride I could see the liftie ahead  folding up the seats of the benches as the skiers disembarked.

It was pretty dark up there at 4:35 p.m. and I felt a little disoriented, noting that even though I’d skied this run dozens (hundreds?) of times this was my first day out this season, my latest ever, and the shapes of the drifts and lines vary a little bit from year to year.  I am going solo, not unusual. I ease my way down Mighty Mite, the easiest line down to the tram station.  After that the lights are on and ironically this provides much better definition than the flat light of the sun.

There’s not much evidence of any grooming and some of the lines are mashed-potato-ey and the effect it has on me is that I’m tentative and easily worn out.

So few people on the tram that the operators don’t bother to give the tram speech, which hasn’t changed in years, though can be useful for tourists to be warned of the tower swing.  The operator has the Marley cranked:

He is singing along, expertly timing every pause and intonation.  Actually, about half the tram riders are singing along: Oh, what a new day.

A few tram rides later the operator says, “It’s like the same 15 people in every tram.”

On many of my runs I can’t see anyone below or above me.  As if I have the whole mountain to myself.

I ski until my legs are about to buckle. I am reminded on an on-line training forum someone asked if downhill skiing counts as “training.”  I chimed in: I don’t know what kind of skiing you do, but I pretty much ski until I cant even stand up.  So yeah, I count it as training.

I know my wife is entertaining friends at home, so I’m in no rush.  I stop by Chair 5 for a cheeseburger and glass of Broken Tooth IPA.  The highway is dark as hell and there is some new rockfall–new since the drive down– to skirt.

The next morning our friend Sarah who early-morning commutes back and forth from her bakery in Anchorage to her cabin in Bird will be just behind the car that gets crunched in rockfall. Mile 113.  She has to call the ambulance and wait for the road to open.  Last I heard the guy is critical and Sarah is staying in town for a few days.

Posted by David Stevenson at 5:38 PM No comments: