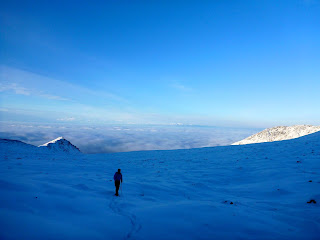 The month I graduated high school Joni Mitchell released Blue.  For me and my friends the draft loomed (but never arrived) over us and it was hard to focus on the hazy future. Mitchell’s Blue was a particular person, James Taylor, but we felt she had all our backs somehow: Now you've got to keep thinking/You can make it thru these waves.  Most of us did.

Cyanotype is a 19th century photographic printing process that produces a cyan-blue print. The first book of photographs, published in 1843, was composed of cyanotypes made of British algae by “A.A.”   Originally attributed to Anonymous Amateur, the book was soon found to be the work of Anna Atkins.  The algae itself floats ghostly white against the blue background. The New Yorker refers to the Atkins prints as “delicate collisions of science and art.”  The process was used into the 20th century, particularly as blueprints.

When our blue-eyed son Macklin was in first grade he came home one day singing.
It turned out to be a Euro-techno world-wide pre-viral sensation by an Italian group
called Eifel 65.

Yo listen up, here's the story
About a little guy that lives in a blue world
And all day and all night and everything he sees is just blue

We often wondered whether Macklin possessed an eidetic memory.

The idea that the ancient Greeks didn’t have a word for blue comes from Goethe’s Theory of Colors.  This is his rationalization for Homer’s famous description in the Illiad of “the wine dark sea.”   But Goethe wasn’t entirely wrong.  Caroline Alexander observes that the Greek word for blue, kuáneos, was not used to describe the sea until the late sixth or early fifth century BC. by the lyric poet Simonides—and even then, it’s not clear if the word is used to describe color or light.  The city where I live, Anchorage, is bordered on the west by the Cook Inlet and the north by the Knik Arm.  An enormous tide of forty feet reveals an expanse of mudflats when the tide is out.  The water is never blue, always brown.

Robert Hass’ “Stanzas for a Sierra Morning” seems to begin in the real world and shifts midway to the more elusive:

He continues, speculating that such a blue exists, but maybe in poetry.  He concludes, advises, “Keep an eye out for the immaculate azure.”  Wherever we may see it, I presume.

We picked blueberries in the summers near a town called Oquakwa near the Mississippi.  Oquakwa was famous as the site of the death of circus elephant, Norma Jean, struck by lightning and buried on the spot in the center of town.  The circus, it was said, closed down shortly after the loss of its star attraction.  I remember the time the heat and humidity were overwhelming and we gave up early and got ice cream cones as we drove out of town.  The photograph of Macklin that day is etched in my mind: his short, styled hair, sweat-beaded face’ he’s sitting on a blue metal lawn chair.  The ice cream cones melted so fast we threw them out the windows of the moving car.  We froze the blueberries individually on cookie sheets and ate them into the fall.

Oliver Sacks believed that indigo blue was the color of heaven, the color of eternity and he wanted to see it.  He believed that the right drugs would enable this quest. He writes in his book, Hallucinations, that after imbibing, suddenly “as if thrown by a giant paintbrush,” a “huge, trembling, pear-shaped blob” of color appeared magically on the kitchen wall. It was a miracle of blue. It was, he says, “luminous, numinous; it filled me with rapture." He would never see this again.

An inorganic pigment, Yln Mn, was created in 2009 when oxides of manganese, yttrium, and indium were heated together at 2000˚ F in an Oregon laboratory.
Considered the first new complex inorganic blue to be manufactured since cobalt 200 years earlier, it absorbs red and green light waves while reflecting a “superblue.” Crayola’s newest crayon flavor, Bluetiful, is based on this.  Since then a more recent bluest blue has been created.

Macklin, our lost son. He often used my laptop, mostly to access music.  I stumbled over a file of his recently: ten most played songs.  Seven of them were by Modest Mouse.  The one he listened to most is called “Baby Blue Sedan.”  It begins: “A nice heart and white suit and a baby blue sedan/and I am doing the best that I can.”  And later: “And it’s hard to be a human being/And it’s harder as anything else.”  Though this song may speak to and of him best, I can’t bear to listen to it all the way through.

Haint blue is shade of blue that Gullah people painted on the ceilings of their porches to prevent haints from passing into their homes.  Haint is form of haunt, translated loosely as ghost, or more specifically as a witch-like creature that chased its victims to their death by exhaustion. Haint blue was intended to either to imitate the appearance of the sky, tricking the haint into passing through, or to mimic the appearance of water, which haints traditionally could not cross.  I have not painted the ceiling of our porch haint blue.  The ghosts are already inside; more are welcome.

Posted by David Stevenson at 3:27 PM No comments: