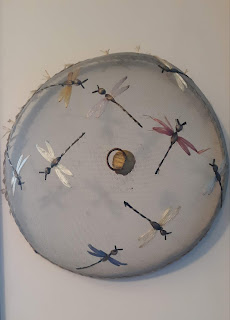 Visiting family in Portland.  In the kitchen my eyes are drawn continually to the clock, the place where a clock would logically be.  But it’s not a clock, it’s a round bowl-shaped, screen-thing decorated with dragonflies.  Many glances before my brain is convinced my eyes will not find a clock there.

On the beach there has been an enormous die-off of little crabs, about a nickel or quarter-sized diameter.  Their bodies mark the long uneven lines of high tide.

For Mother’s Day the community has hid glass balls–floats–on the beach for people to find, not unlike an Easter egg hunt.  These are decorative newly-made glass balls, not the old ones designed to keep fishing nets managed.

Groups of people are searching for the glass floats, randomly, combing through the grass and log-strewn dunes where we typically enjoy solitude.

My wife Aisha and I believe that certain small found objects are tokens of good luck.

Historically, I have been good at finding beach glass, water and sand erosion rounded shards and scraps.  Over these seven days I am finding almost none, but Aisha is finding much. 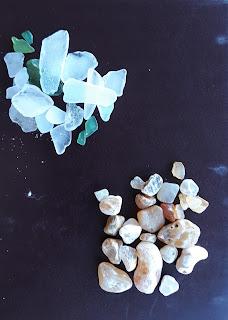 But, oddly, I am finding many agates.  I am thinking of an old Jesse Colin Young song:

And my front pathway markers
Are pieces of granite and chert.

Note to self: research the difference between chert and agate.

Note to self: hold on the vinyl LPs (which I haven’t played for years).

The Green Flash.  I have always wanted to see this near mythical phenomenon which occurs over the horizon as the sun sets in the Pacific.

Is that a real thing, Aisha asks, the Green Flash?

I tell her I believe it.  The cloud-dancing coast of Oregon in late spring will probably not be the best place to see it.

“The Blue Men,” my favorite story by Joy Williams.  The line:

The blue men! We wanted so much to see them but we never did.

Written on postcard from the main character’s now-dead son.

We visit Mo’s for dinner, an indulgence, a ritual.  There’s a touristy junky toy shop alongside the line to be seated and I remember Macklin finding this bottle opener with a pirate’s head as the handle.  The pirate looked exactly like him. 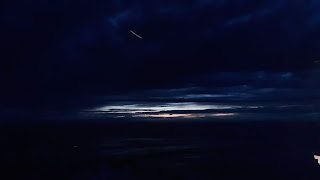 Outside of Mo’s is where the Siletz River meets the ocean and the water roils with the meeting of the fresh water emptying out and the salt water rolling in.  Seals are out in the water by the dozens rearing their head above the surface randomly, sleek water dogs, a couple dozen of them.  Above, an equal number of seagulls squawk and wheel and dive also seemingly at random. In the sky above all this the sun is radiating through spectacular dark clouds.  There won’t be green flash tonight but it truly is grand.

We’ve been meeting with a real estate agent here at the coast.  We trust her, and like her.  She reveals a surprising amount of personal information about herself, unbidden.  Which seems somehow unlike her.  She tells us about the time when she and her twin sister were attacked by an intruder at their home in Ketchikan.  Their father arrived in time to prevent disaster.

Did they catch him?  We wanted to know.
No, his footprints went through the snow in the backyard, over the fence and into the woods.

None of the houses we look at inspire us to imagine we could love them more than the house we live in now.

How many kids do you have?  The real estate agent asked.
One, we half-lie.  It’s easier.

A few days before he died Macklin and I had a long conversation.  He was thinking, he said, of moving to Lincoln City.  This surprised me because when we took him to Lincoln City he sulked the whole time and barely left the hotel room.  He also asked if I had a spare crucifix.  I did.  He asked if he could borrow a shirt for a job interview.  That blue striped one.  Of course.  Could you iron it for me?

I wish I could remember all the details of that long conversation.  I mainly remember he was calm and wise, as opposed to his more frequently presented self: agitated and smart. 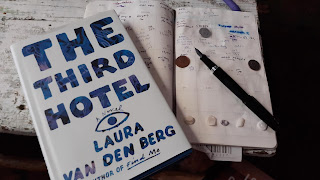 Behind every death lay asset of questions. To move on was to agree not to disturb the questions, to let them settle with the body under the earth. Yet some questions so thoroughly dismantled the terms of your own life, turning away was gravitationally impossible.

Because my friend did it, I enter some bits of information into The Death Clock.  According to the Death Clock I will live to be 69 years, 11 months and 2 days.  My last day will be Wednesday May, 10, 2023.

At the shortest life cycle a dragonfly from egg to the death of the adult is about six months.

Which is why I have almost always avoided fortune-tellers, psychics, tarot, and even shamans and lamas.  Don’t ask about what you don’t wish to know.

For Mother’s Day my wife asked me to accompany her to Sunday mass.  The priest was dreadful, a  second-language speaker who paused a full breath between each word.

My wife demanded a refund from me.

At the shopping center.  My wife points to a penny on the ground.  I pick it up.

I put it there, she says, for you to find.
What?
Yes, my shirt was $9.99 and they gave me penny.  I felt sorry for you because you haven’t found any beach glass. 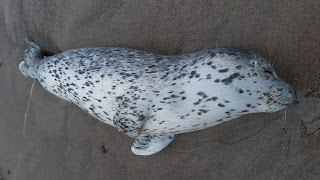 On our next-to-last morning we find a dead baby seal on the beach.  We had seen them riding on their mother’s backs.  This one shows no sign of trauma and I wonder if it has somehow drowned.  Its lips are curled upward as if in a smile.

The room we are staying in is right on the edge of a bluff looking over the beach.  We have stayed in this exact room, by request, many times. The windows look west and north.  Because we are so close to the edge, the birds swoop past the windows as if we’re in tree house.  We look down at the beach with a bird’s eye view.  People, whose actions are mysterious from this height.  Dogs, running with joyful abandon.

In the last photograph of Macklin, the one the trooper showed me on his cell phone to identify him, he has just been pulled from the water.  He is not smiling.  No, he is not smiling at all. 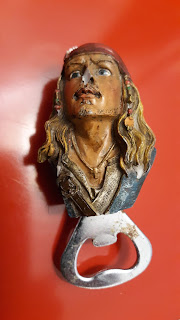 At the memorial service I am sitting next to his girl friend.  She reaches over to hold my hand, I think, but instead she passes to me the pirate bottle opener. He continued his spiritual journey dressed in the shirt I ironed for him with the crucifix he asked for.  I hold on to the bottle opener.