The Tipping Point: Notes from an Aging Alpinist 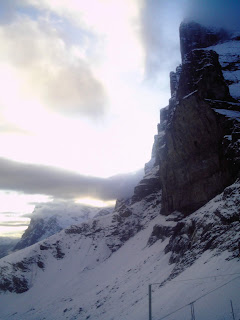 Consensus on television game show: 50 years of age is the point at which men “let themselves go,” physically speaking.

I have signed up for two ski races this season.  Goals.

I haven’t participated (“raced” would be an exaggeration) in five years.  The reasons for this being, in no order: race called off because of lack of snow, death of son, rescued by helicopter out of the mountains, heart surgery, shoulder surgery, self-pity.

“Do not go gentle in that good night.”  I didn’t need Dylan Thomas to tell me that.

Thomas died the year I was born.  His last words were “I’ve had 18 straight whiskies.  That’s a record.”  However, he didn’t die of alcohol poisoning, but a host of other maladies, mostly self-induced.  I don’t know if he went gently or not, but he went early. He was 39.

Ueli Steck, the Swiss Machine, climbed the north face of the Eiger in less than three hours.  I would imagine he maybe could have done 11,300 in about the same time.

We turned back due to high winds the other day before we got to the summit of Flattop.  I hike with three guys who are more fit than I am, younger, too, I add now in self-defense.  So they are above me when they turn around and pick me up, so to speak, on the descent.  And I am always glad to “retreat.”  And I wonder: will there ever again be a time when the others want to fold and it’s me who wants to continue pushing upward? Or have I passed a tipping point there?

According to an Institute of Medicine report, a good death is: "Free from avoidable distress and suffering for patient, family and caregivers, in general accord with the patient's and family's wishes, and reasonably consistent with clinical, cultural and ethical standards."

Before his record on the north face of the Eiger he had climbed the route around 40 times.  Ueli Steck died soloing on Nuptse.  He was 40 years old.

My best estimate is that I have climbed (walked up) Flattop around 200 times in the last decade.

I had the cornice dream again last night.  In this one I am skiing close the edge of a summit ridge and the cornice begins to crack and slowly give way.  As I am falling I believe I am going to survive, that the snow will somehow cushion the landing.  I know there is a shelf that will catch me 150 feet below.  For some reason this seems completely survivable.  I awaken before I find out whether the dream-me survives or not.  In the light of day, of course, one would not survive this scenario. But in the dream world, I was certain I would.

“For when you gaze long into the abyss. The abyss gazes also into you.” So Nietzsche famously said.  I have been guilty of the naivety of taking Nietzsche (and others) literally.  That is: I have gazed into many literal abysses. In the mountains.  What has been on my mind foremost in those moments was a note to self: "Don’t fuck up here.”

Peter Habeler climbed the north face of the Eiger at the age of 74.

We had made two or three good climbs, depending how you count, the highlight possibly being chased off Mt Temple by an enormous grizzly.  We were having breakfast at the little restaurant in the Alpine Club of Canada’s hostel at Lake Louise.  The room had a stone fireplace and was decorated with antiquated climbing equipment.  Among which we recognized the gear we first used on our first Canadian Rockies excursion, 1973.

I had kidney stones that would not pass and they put me in the hospital to manage the pain.  The pain would not be managed.  Ironically, when I had life-threatening cancers there was hardly any pain at all.  Anyway, they had me on an i.v. morphine drip which I could self-administer (up to a point, of course).  I maxed out quickly.  I was curled up in the fetal position and I remember there was a television up in the corner of the room.  It was turned off and in the screen I could see my colorless reflection: a shrunken man curled up in pain in a white hospital gown.  I remember thinking, so there’s Nietzsche’s abyss. I remember thinking, “So this is how it ends.”

But Habeler had also set a speed record on the north face in the 70s with Reinhold Messner.  With whom he was also the first to ascend Everest without the use of bottled oxygen.

Cancer wore my dad out at 82.  Nonetheless his last words were reported to be “get me up, goddamnit.”

Fred Beckey made over a thousand first ascents, mostly in North America.  The first time I met him was in the mid-70s.  He came by Early Winters in Seattle trolling for prospective partners. He would climb with anybody, but not everybody enjoyed climbing with him.

As late as his early nineties Beckey was still trying to do hard climbs with the aid of younger, well-meaning climbers.  He had a tick-list of four routes he was desperate to accomplish, any one of which would  kick anyone’s ass.  He was unable to get further than to the base of them, which was a considerable achievement.

I’ve climbed Beckey routes all over the west.  In 2014 we tried to climb the famous West Ridge of Mt. Forbidden in the North Cascades, a route Beckey first put up in 1940.  We were super slow on the approach and exhausted when we arrived at the high camp.    We discovered the glacier had all but melted out leaving a dangerous gauntlet of tottering seracs and an exposing an additional several hundred feet of rock climbing where there had once been snow.  We abandoned the climb.

The last time I saw Beckey he was bound to a wheelchair.  He would pass away later that year at home, in the arms of beloved friend.  He was 94.

I turn 66 this year.  Six more centuries and I become a beast.

Mountaineering history is filled with many haunting deaths.  On Nobukazu Kuriki’s fourth Everest attempt frostbite took nine of his fingers to the middle joint.  He was 36 years old last year when he perished on his ninth attempt, solo.  His final You Tube message: “I hope to keep climbing with you in spirit.”

The Tour of Anchorage is nine days out. We have enough snow. The ten-day weather forecast is good. My training has been . . . consistent.

In the cornice dream I am not panicked, or even stressed.  I know I am going to survive.  I think, even, that I will live forever.

Photo: North Face of the Eiger from the side, 2007

Posted by David Stevenson at 2:06 PM No comments: