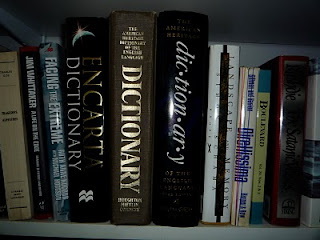 My current living situation is this: about three fourths of the books I own are stored in boxes in my garage. This is due, mostly, to having moved from a very large house in the rural midwest to a very modest-sized house in Anchorage.

I went out to the garage the other day searching for an anthology in which appears Michael Cunningham’s terrific story “White Angel.” This shouldn’t be so much a needle-in-the-haystack affair: there should be a whole box of anthologies. But I have not seen the box since we arrived here in Anchorage.

What I found instead was my collection of Canadian Alpine Journals, Dougal Haston and Peter Gillman’s, Direttisima, which I forgot I even owned, and which would have been invaluable a few months back when I was writing an essay on Haston. I also found one copy of my American Heritage Dictionary of the English Language (1970). I really like the 1970 edition because that’s the year I started paying attention to words. I actually have another copy of the same edition, so I can have one at my office and one at home. Thus: the other copy of the dictionary is missing. However, on the plus side, I located the third edition of the same dictionary, from 1992. This is my second favorite dictionary. Comparing definitions from these two dictionaries, published 22 years apart, is the best evidence I know to demonstrate that language is fluid, evolving (or, as some would have it, devolving). However, the largest book I own, or once owned, the Oxford English Dictionary, remains missing. I have the magnifying glass, though. I am trusting that it, and the duplicate American Heritage, are out there, along with my vintage Icelandic to English dictionary, which I love purely as an object in the world.

On the plus side I retrieved my mostly unread copy of Simon Schama’s Landscape and Memory, as well as the 20th anniversary edition of Boulevard, which belongs at the office with the rest of the Boulevards. Finally, here is the long-lost Illustrated Guide to Glacier Travel and Crevasse Rescue by Tyson and Cleland which has the best drawings for making and attaching prussic slings, a task which for me never seems to become second nature and which I will be needing very soon for a Byron Peak attempt.

The only books I know for certain are lost were mailed here: one box arrived opened and half-empty. It had been filled with American Alpine Journals and now my collection has holes. The rest of the missing books aren’t really missing, I have faith in their presence out there among the rest of the human detritus for which there is no room indoors: bicycles, skis, wicker furniture, plastic tubs filled with random household goods, studded winter tires, including a set of four for a car we don’t even own. It’s a sad state of affairs, but temporary.

Oh, and I never found my “White Angel.” I found (miraculously) a copy in the library, but what I didn’t find in the library is another story, longer and sadder.
Posted by David Stevenson at 5:27 PM