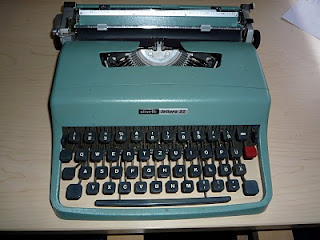 Yet another material burden I relieved myself of when we moved was typewriters. I had two: an electric Brother, which was state-of the art on the eve of computer world-dominance. and even had a clumsy little memory. I also had a garage sale portable that I thought of as an objet-d’art.

I had previously jettisoned my rebuilt Remington on which I typed some of my undergraduate essays. It had a big dent in the carriage that I covered with an epigraph from Dylan’s Idiot Wind “Their minds are filled with big ideas, images, and distorted facts.” (Had I to do over I might choose from the same song: “You’re an idiot, babe, It’s a wonder that you still know how to breathe.”) I plucked the letters off the keys with a pair of pliers before I let it go.

Last week I plucked an Olivetti lettera 32 out of the trash. Oh man, I always wanted one of these. (Would now be a good time to confess that I can’t even actually type? I can process words with two fingers, which is fine because I can do that about as fast as I think (in other words not very fast) and then revise the heck out of it).

An Olivetti lettera 32 is a beautiful machine. Cormac McCarthy typed every one of his novels on one and then auctioned his off for the startling price of $254,000. Then he bought another one, but in better condition. I read that he paid a little over 300 for it.

When I needed Eddie, the main character in my novel, to buy a typewriter in Mexico City 1974, he bought himself an Olivetti lettera 32. Thus, he owned one before I did. He could also type better than I can, though I don't think I mentioned this in the book.

Last week I was watching the film version of Patricia Highsmith’s The Talented Mr. Ripley. And sure enough, when Tom forges letters on Dickie’s typewriter to provide a paper trail suggesting Dickie is alive (and not dead, at Tom’s hands) he types them on Dickie’s lettera 32. However, the lettera 32 was not produced until 1963 and The Talented Mr. Ripley is set in the late fifties. Thus the movie was sloppy and totally unrealistic. Just kidding, it’s a terrific film.

But 1963 was an auspicious year: it’s said that every war correspondent writing from Viet Nam did so on an Olivetti lettera 32.

I’m going to order some ribbons for it. Then, after the apocalypse, when the grid has collapsed and word processors can’t be powered up because everyone only has a tiny bit of power that they have to save so they can blend up a pitcher of margaritas, I’ll sit on an orange crate in the market typing up letters and legal documents for hire. I’ll do yours for free, so long as you’re not in a hurry.
Posted by David Stevenson at 3:45 PM