Among the Giants with Emerson and Kiko 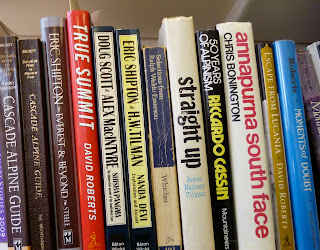 If you’ve been reading all along you might remember that a central preoccupation is my books and the lamentable fact that I moved from a huge house to a small house, thus much of my literary treasure house is hidden away in boxes in the garage. There remain titles that have yet to be recovered, but I believe they are out there.  Imagine, then, my distress when the hot water heater in the garage imploded, flooding the place.  Six large boxes of books had to be rescued, and I found, happily, none were damaged.  I also found all my Bruce Chatwin and all my Charles Baxter, curiously, in the same box.  And, I found my Emerson, the Riverside edition, also curiously, in a box of mountaineering books, among Bonington, Cassin, and Shipton.  I suspect it was in that particular box for a reason, but I can’t remember what it might have been.  More worrisome: this means that for four years, the years these were cloistered in the garage, I have not consulted Emerson.  Shameful, and soon to be remedied.

I was just thinking of Emerson because my friend, the poet John Mann, has used a line from Emerson as an epigraph in his book of poetry Able, Baker, Charlie (winner of the 2011 national Poetry review Book Prize, forthcoming in August 2012):
“Now many are thought not only unexplained but inexplicable; as language, sleep, madness, dreams, beasts, sex.”
I have to ask John where he found those lines; looking for it in Emerson’s essays could take days, weeks, though there are far worse places to be lost.

Inside my Emerson book was a folded piece of paper and I recognized it immediately as a student’s work from my high school teaching days, circa about 1985.
The short essay was written by Francisco Arteseros, who signed his name Fco and liked to be called Kiko.  I remember him well because, well, because of this essay, but also because he was dropped into our school as if out of the sky with not a word of English. His father was a physicist on assignment to the Jet Propulsion Lab in Pasadena, and both he and Kiko’s mother were elegant and worldly.  She, too, knew no English and was teaching herself by watching soap operas.  I liked the parents immensely and admired the panache with which Kiko and his brother entered into high school life in America.
I will now transcribe Kiko’s essay, exactly as it appears on the page, which is the original and covered (much to my embarrassment) in teacherly red ink.

THE JUMP
It was spring, the moust beautiful estation of the year, birds flying, everything was just wonderfull.  THE sun was bright and illuminating the scenary of my experience. That night, I had a dream my new bicycle a shiny wonderfull machine made for run as fast as the win.  When I went to buy the bicycle, in the bicycle store, I sow a lot of god bicycles of all kinds, chrome, small bigs, smalls, all kinds of excellent bicycles, I was about to buy one really good but, then in the last moment I sow one bicycle, the bicycle of my dream the special bicycle, the best and mist beautiful machine I ever seen.  So I bought it and took it home, I cleaned it and fix it. The next morning I weak up early, it was not me, I was a different person, I felt stronger than ever before, I was ready for something I did not know. I went right to the garage, and I did not know and I went straight to the bicycle, it was there, it was the most wonderful machine I ever seen.  Something made me take the bicycle and started riding, the bicycle tuck me to the park, nobody was there, it seemed like I was the only one in the world.  The park was full of roses and all kinds of flowers,  could feel the wonderful powere of nature in the air in the flowers in the trees in the birds, suddenly I saw this big jump so I ride my bicycle straight to it, I was gaining speed by the seconds, I felt how my all body was getting ready for the jump, suddently I felt my self flying in the air I was floating in the space, I could feel myself becoming part of the nature I was nature too I could smell the aroma of the roses and the fresh air in my face.  In that moment I felt that God, nature, and my soul were the same thing.

At the bottom of the page are two notes from me, yes, in the red ink:
This is very good, and Please see me about the grammar. At least I underlined the This is very good.  In the end, I know that, well, I still have the original, meaning that he never did come to see me about the grammar, and also, I hope, that I realized my corrections were absurd.

I remember when Kiko got in a motorcycle accident my wife and I visited him in the hospital, where, when his mother left the room, he lit up a cigarette. I suppose this memory, this writing, is the best illustration I can offer as proof of the ephemeral rewards of teaching.
And, just this: the reason Kiko’s essay is tucked in among Emerson’s pages must be the same reason that Emerson was tucked in among the mountaineers, giants among giants.

Posted by David Stevenson at 12:12 PM