A Late and Unvited Correspondent Responds to Maggie Nelson's Bluets 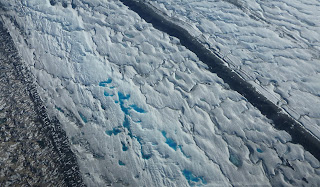 1. During the time she was writing Bluets, 2003—2006, Maggie Nelson received “blue reports from the field” from her “blue correspondents.”  She acknowledged 22 “principal correspondents.” I am nine years after the fact, and uninvited.

2. When Dylan wrote, “Where have you been my blue-eyed son?” I always heard my father talking to me.  Also, I took his first answer, “I’ve stumbled on the side of twelve misty mountains,” literally and personally.

3. I took Bluets on a short climbing expedition in the Alaska Range.  As it happened we spent only one night at base camp and I was only able to read about the first third of the book.

4. “I am not very interested in the matte stone of turquoise,“ Nelson wrote.    Nor was I.  Once I knew professional gambler, wildly successful who wore enormous turquoise rings on gnarled fingers that belonged to his past life, the workingman he once had been.  I associated turquoise with a kind of aesthetic coarseness.

5. I have read some great books in expedition tents, including Moby Dick and Portrait of the Artist as a Young Man for the first time in the St Elias Range. More recently China Mieville’s The City, The City on the Harding Icefield.

6. Late in her book Nelson confesses to learning very late into her project that bluets can be translated “cornflowers.”

7. In the 1970s a “bluet” was French stove favored by climbers and backpackers all over the world.  The parts of it that were not chrome were blue and it matched the propane canisters for it, also blue, and known in Europe simply as “gaz.” These stoves were simple to use, and lasted forever.  The empty gaz canisters were littered all over the wild places of the world, even Everest Base Camp.  The flame, too, was pure blue.

8. In a dark forest in Nepal I came across a lone nomadic trader who had set up a small table in the most unlikely place. The scene was out of a fairy tale.  From him a bought a stone of turquoise and I have not thought of the stone the same since.

9. ”Once I travelled to the Tate in London to se the blue paintings of Yves Klein . . . ,”  Nelson writes. Just this spring I became reacquainted with an old friend who had traveled to Amsterdam as a form of escape and discovered a passion for Vermeer.  He would write a book about this obsession and I acquired a copy of it.  The next day, I was in the Minneapolis Museum of Art and there on loan from the Rijksmusem was “Vermeer’s Woman in Blue Reading a Letter.”  You could make this coincidence up, of course, but why would you?

10. On this expedition the most dangerous aspect is the number of crevasses on the glacier. They are both hidden and visible, and there are many.  Peering into one the whiteness goes to blue, goes farther than I can see, to darkness.

11. Horace de Benedict de Saussure invented the cyanometer, Nelson tells us, to measure the blue of the sky.  She mentions this critically, in disbelief that such a thing may be measured. She does not mention his early, the third ever, ascent of Mt. Blanc, nor his attribution as the father of alpinism, nor that he is considered the person who “made” Chamonix what it is today.

12. I love writing with fountain pens, always with blue ink so that my signature contrasts conspicuously with the black ink of machine-printed documents.

13. In The Blue Light (Das Blau Lichte), Leni Riefenstahl plays Junta, the beautiful mountain girl who reigns over a sacred mountain space, a grotto of crystals high on the mountain that is illuminated during the fill moon.  Many young men from the village below have fallen and died trying to find this place. When Junta shows a young man the source of the blue light, he harvests all the crystals and she is crushed and falls to her death.  The film was made in 1932.  Later Riefenstahl would be a kind of Nazi sympathizer and the names of the Jewish people who worked on the film were elided from the credits.

14. My own blue-eyed son, the one who looks the most like me, is the child I understand the least.  Is the most tenuously tethered to the world, to me.

16. When Nelson cites Schopenhauer it is to note his insistence that pain is the “most real thing.”  In On the Fourfold Root of the Principle of Sufficient Reason, Schopenhauer discusses how reason affects our perception of distance, including an anecdote that "Saussure is reported to have seen so large a moon, when it rose over Mont Blanc, that he did not recognize it and fainted with terror."  Apparently Schopenhauer thought this ridiculous.

17. Reading Bluets on the glacier I was struck deeply by the book's femininity.  As if this were an artifact from a world I had left far behind.

18. Every dozen or so years someone writes a book about blue, Nelson observes.  Hence, I suppose, there is no need to attempt to be exhaustive; perfectly appropriate to be personal.

19. Another rhetorical literary question I have taken personally comes from Cummings: “How do you like your blueeyed boy/Mr. Death?”  Mr. Death, one suspects, is indifferent, but I can tell you that this blueeyed boy does not much care for Mr. Death.

20. The best definition of the blues I know comes from James Baldwin: “ They [the blues] were not about anything very new,  . . . keeping it new, at the risk of destruction, madness and death, in order to find out new ways to make us listen.  For while the tale of how we suffer, and how we are delighted, and how we may triumph is never new, it always must be heard.  There isn’t any other tale to tell, it’s the only light we’ve got in all this darkness.”

21. After the expedition we sit on the glacier waiting for the pilot who will take us back to the green world.  We stare across at the forbidding north face Mt. Huntington, its icy blue seracs and cornices enshadowed until the morning.  Climbed only once.

22. Flying over the Ruth Glacier there are small blue ponds of meltwater forming on the snow.  This blue is known only to a privileged, lucky, few: pilots and mountain travellers.

23. I have written of this elsewhere, but once on the glacier below Mt Blanc, we witnessed a moonrise so bright and overpowering that at first we couldn’t believe it was the moon.  Don Whillans, the great British workingman climber, drunk, and pugilist also experienced this.  So go back to your dark smoky library, Schopenhauer, and mope for few more centuries.

24. I saw a piece of turquoise in the parking lot on my way to lunch.  I bent to pick it up and upon touching it realized it was a well-chewed piece of bubble gum.

25. When I return from the glacier I first finish reading Bluets, which in the end, I suppose is not so much about blue as it is desire and loss.  And then I turn to the account of the first, and only, ascent of the north face of Mt. Huntington by Jack Roberts and Simon McCartney in 1978.  It is an unimaginable feat, leaving no mystery as to why it has gone unrepeated.  And, this blue-eyed boy is very happy to have been released from the glacier, its blue ice and the myriad possible ways it might have held us in its grasp forever.
Posted by David Stevenson at 2:00 PM