"What's on your night stand?" 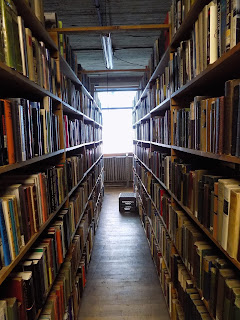 When asked what books were on his nightstand, Simon Winchester replied, “It’s rather like a dog’s breakfast.”  I first understood this to mean “a complete mess,” but later wondered if it meant “a little bit of everything.”  Turns out my first impression was more accurate.  In my case, though, it is both: a complete mess and a little bit of everything.

The actual surface of my nightstand is small and usually too cluttered to hold a single book.  Instead, at its feet are three stacks of books.   The stacks are governed by no organizing principle and are in a constant state of reshuffling.  They consist mostly of books I have not yet read, but which I intend to read.  An exception to this are a group of signed books I brought back from the Banff Book Festival: Bernadette MacDonald’s Freedom Climbers and Barry Blanchard’s The Calling among them.  These await my finding a more hallowed permanent location for them.  Also among these is a Paul Zizka photo book of the Canadian Rockies, Summits and Starlight.  It’s a guilty pleasure like a hidden box of chocolates.

A second category is really just three books: Thomas Mann’s Lotte in Weimar, and Goethe’s Elective Infinities, a nice hardcover edition published in the 1960s and recently found at Powells.  I also found a nice hardcover edition of the Goncourts Journals—Paris in the 1700s—my curiosity having been piqued by Heidi Julavits repeated mentions of failure to make progress with them (the Goncourt brothers) in her memoir, The Folded  Clock.

A third category is “newly acquired,” which in addition to the Goethe includes other titles from the Powells junket: Denis Johnson’s nonfiction, Leap, and two of Julavits fictions: The Effect of Living Backwards and The Vanishers.  Also: Michel Farber’s’ The Book of Strange New Things.

Almost forgot this category: books sent to me unbidden in my capacity as book review editor of The American Alpine Journal.  These break my heart because most of them will not be reviewed, nor will I read them.

This accounting mentions fewer than half, I’m sure.  And some of the rest are unclassifiable.  There is the Selected Poems of Pat O’Neill, a massive book (for poetry) of 379 pages.  These were culled from various flashdrives and garbage bags of notebooks by the composer and great autodidact, Jerry Brennan.  Never heard of O’Neill?  No, you wouldn’t have; he’s an old high school friend turned northern Michigan curmudgeon (according to his wife) poet.  The work is extraordinary.

Since all these categories (such as they are) are shuffled together my copy of the Dalai Lama’s daily meditations is usually out of sight, and therefore, also out of mind; but when it manages to percolate to the top of one of the a stacks I try to read from it daily.

If “What’s on your nightstand?” is really just another way of asking “What are you reading now?” the answer is Julavits’ The Effect of Living Backwards, which I came to from reading her nonfiction first, a reversal of my usual practice. Thus I am reading “backwards.”  In that book she wrote this sentence: “I am a wallet head of exuberance.”  I would be happy to read a whole book just to find such a sentence, but I liked the rest of them too.

This gives me an opportunity to foresee another obvious question and just come out and tell you that the book I read last year that I loved most was the aforementioned The Folded Clock.  Like much of what I love most it’s hard to articulate why this is so.  When I finished reading it, I immediately started reading it again from the beginning like a chain smoker lighting his next cigarette off the butt of his last, saving a match and keeping the chain linked.

A couple days before Christmas I was in John King Books in Detroit, one of my favorite places in the world.  Oddly, I left without making a purchase, though I had picked up a copy of Chris Bonington’s The Everest Years at an antique store a day before; it too now rests in one of the stacks by my bed. Nonetheless, I enjoyed every breath I took inside of John King Books.  In addition to the breaths, I took photographs, somehow invoking the environmentalist credo: leave only footprints, take only photographs.