My Closing Words to Our MFA Residency '17 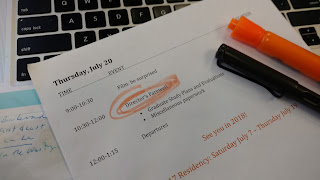 I’m not sure how much of what I have to say here will have anything to do with writing.  These are just the thoughts I have had over the last two weeks while we were sharing this long/short intense journey.

I read on the internet about a young kid fishing in a pond who hooked a purse that had been lost 26 years earlier.  It was returned to its owner and the kid said, “I was lost for words.”

I am lost for words when I try to explain what happens here at the Residency.  I wish I knew the physics to explain the peculiar behaviors of time here.  Some days seem to never end and our time will go on forever.  By the time it’s over it seems to have occurred in a blink of an eye.  Jo Ann Beard’s visit ended three days ago, but those three days feel like a month.  I hope it takes 50 weeks for you to unpack all you’ve absorbed. I hope that, like me, you have a list of books you can’t wait to read and a list of work you can’t wait to write.

The Tour de France, the most famous bike race in the world, occurs every year during the Residency.  It comes on Alaska television at 4 a.m..  I start watching when I wake at about 5:30, every day.  I was telling this to Jo Ann and she asked, “What’s so interesting about it?”

Here’s what happened a couple days ago, I tell her.  They’re going downhill at 45 miles per hour.  A rider, one of the favorites, misjudges a curve and his rear tire slips off the pavement and he goes down.  He shoots across the pavement so fast he hits a bike that was a head of him and that guy goes down.  The guy who was hit pops up, but his heel inadvertently hits the derailleur of third rider.  The kick to the derailleur jams it into place so that the rider is stuck in that gear for the rest of the day; he can’t shift.  So: the guy who first fell, a pre-race favorite, breaks his pelvis and collarbone and is out of the race.  The guy he hit loses a full minute of time, but manages to finish in the top ten.  The guy whose derailleur is stuck?  He never has to think about shifting, he’s stuck on a very high gear, hard to pedal.  He just goes as hard as he can.  Relieved of the burden of strategizing, he finishes first on the day 3/10,000 of a second ahead of the second place finisher.

And, by the way, the announcer tells the audience to visualize it this way: “Imagine jumping out of a car going 45 m.p.h. wearing only your underwear and a styrofoam cup for a hat.”

Like I said, I don’t know if it has anything to do with writing.  Take away from it whatever you may.

Last week, my novel was rejected for about the 30th time.  I don’t get too worked up about it, as it happens three or four times a year.  This rejection letter was a particularly cold, though:

“Dear Contributor, We have selected a winner to our contest.  It was not you.  We posted the results on this link: . . . .”

This is only barely an exaggeration.

As I have told you many times, the rewards of writing are mostly personal.  The amount of money I have made from my writing over the years has been minimal.  I would hate to calculate it by dollars per hour or dollars (pennies!) per word.  But over the years I have experienced many gratifying moments.  One of the most gratifying also happened last week, within about 48 hours of my novel being rejected.

I received an email from Gary Snyder telling me how much he loved my book, how much he learned from it, and thanking me for writing it.  He’s 87 years old and I sent it to him as a gesture of gratitude, never really expecting him to read it.  So, there’s an unexpected highlight from the writing life.

I have gotten into the habit of sending a note of appreciation to writers whose work I really really love.  I do this about once a year.  I don’t say too much, do all I can not to give the impression of a stalker: “I just finished reading your book and was deeply moved by the experience.  Thanks for writing it.”  Usually, they write back to say thanks; sometimes a correspondence develops.

Last spring I read Manana by William Hjorstberg.  It was brilliant.  After reading three pages I could immediately see the inadequacies of my own novel (explaining, perhaps, the 30 rejections!).  So, I found his email address and told him how much I love his book.  That was on a Tuesday. He died the next Saturday.

In The Great Gatsby, a book that has been a touchstone in my reading life–no actually, just in my life period–the narrator Nick, who for much of the novel has mostly been just reporting what he has observed, tells Gatsby, “ You’re better than the whole damn bunch of them put together.” Gatsby will be murdered shortly after.

After the funeral, attended only by Nick and one other person, Nick goes to one of Gatsby’s business associates, Wolfsheim, to find some answers to the mysteries of Gatsby’s life. He also wants to know why Wolfsheim hadn’t attended the funeral.  Wolfsheim explains that he believes that the time to express your love or admiration for someone is when they are alive.  When they’re gone it’s too late.  Move forward.

As you move forward now, my advice to you is that you tell the people you love that you love them.

See you all next year~

Posted by David Stevenson at 9:56 AM